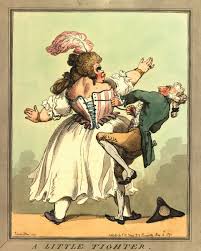 Jane lived a quiet life but the wicked ways of the world touched her and informed her writing. And when I refer to wicked ways I am not suggesting the 18th Century relaxed attitudes to sexuality, where one in three women were pregnant as they walked up the marriage aisle in the 18th century. 1. I mean the wickedness of inequality, hypocrisy and double standards. Women without dowries (or women’s shares), women in lowly social classes, women in loveless marriages and women who were courted for their fortune were in unhappy positions that Austen explored many times in her novels.

Husbands keeping a mistress were a common occurrence and Jane mentioned this in her letters a number of times; she spied one in Bath and she also mentions a neighbour who has “a little flaw of having a mistress now living with him at Ashdown Park”.

She was not a prude, nor easily shocked, just highlighting the unfairness of sexual mores where men continue to play the game and women paid the price.