What can a character, even a minor character, say about an author’s views? 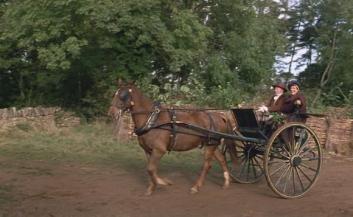 Mrs Crofts, a minor character in Persuasion, says much about Jane Austen‘s views on equality. Unencumbered by children, she travels the world with her husband.

The Crofts show the way to an equal and fulfilling relationship even in a time of hypocrisy. Mrs Crofts was equally a good traveler as her husband having spent much time by his side on a ship having “crossed the Atlantic four times” and been to the East Indies, as well as “being in different places about home – Cork, Lisbon, and Gibralter”. She was “shrewd”, she “seemed more conversant with business” than her husband. The Crofts go out driving in the countryside but she is acknowledged as the better driver. She would often take the reins as they drove around the countryside.

A Keyhole Peek Into the Kingdom